What do the new `new` buttons do? 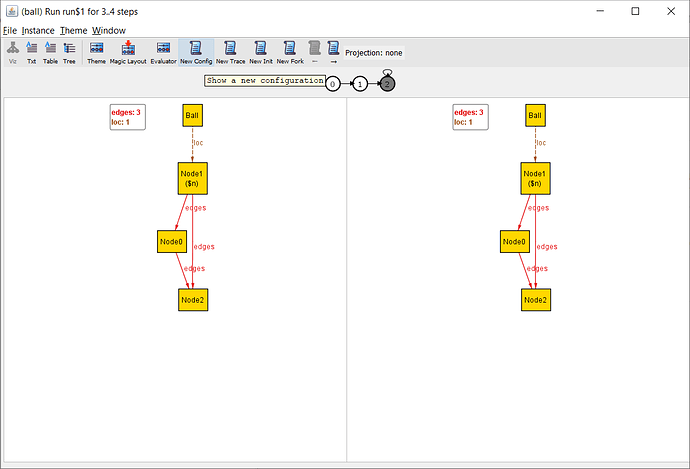 What do “New Config/Trace/Init/Fork” do? Haven’t been able to figure out the differences through experimentation.

Nevermind think I got it

The latter is very useful to check whether a different outcome is possible in a given state, e.g. if it’s possible to fire a different event than the one currently happening.

Followup question: what does the decompose strategy option do?

It analyses each configuration separately and concurrently. Can potentially speed up analysis a lot, in particular when using unbounded model checking.

I am working on the API for Alloy (again). I have to make an API for this traversal.

I think the navigation definitions map to the following tree navigation? 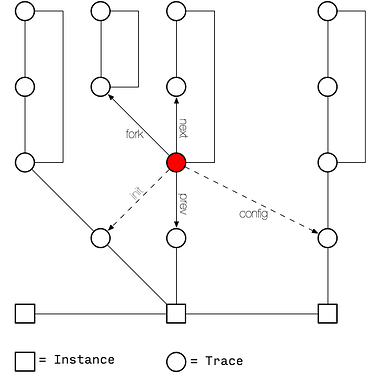 After you have a solution you can iterate over Instance objects. This then maps to calling the definition of config for each instance. I think there is always a finite set of instances associated with a solution?

Since a trace is always infinite, we cannot iterate over the State objects of a trace. I think we need a Instance.getTrace() method to give you a State object. This Trace object can then provide access to:

Would appreciate feedback on this … thanks.

Sorry, still trying to understand your model. What exactly are Instance objects in this perspective?

A Solution was then Iterable over its instances. However, Alloy 6 now has the time trace … this adds another dimension in the navigation.

In the mean time I’ve done some more thinking and came up with the following API on Solution:

So mapping to the concepts of config, next, fork, and init.

The words next, prev, fork, init, are tricky. I think it would be nice if we could standardize on proper terminology of the navigational axes.

Thanks for the feedback. Would be nice if we could get this right.

Thanks for the clarification. The API is looking good, although I need to study it with a little more time.

What seems odd to me is that you separating the retrieval of the configuration from the traces. This makes sense conceptually, but the problem is that that’s not how the backend works: any solution returned by the solver already has a configuration and a trace associated.

What seems odd to me is that you separating the retrieval of the configuration from the traces. This makes sense conceptually, but the problem is that that’s not how the backend works: any solution returned by the solver already has a configuration and a trace associated.

The beauty of API’s!

When I design an API my concern is with the caller and then I later figure out how to make it work.

In the implementation it does require a special flag but it is pretty straightforward.

Thanks for the reply.